Posted on by admin

Have you heard that Brontosaurus no longer exists? How did this, one of the most famous dinosaur names, suddenly become Apatosaurus? Who is responsible?

The seeds of this whole dilemma go back to the most notorious feud between two palaeontologists; Charles Othniel Marsh and Edward Drinker Cope. Although both of these 19th Century palaeontologists started out as friends, a viscous and fierce rivalry soon developed between them. This spurred a kind of competition to see who could name the most fossils in the shortest time. In biology, the first person to name an animal is forever remembered as the original author, their original name can not be changed, so the competition to be the first to name each new type of fossil was intense.

As you can probably imagine, this competition lead to unseemly haste and conditions were ripe to make mistakes. Both Marsh and Cope named some animals twice, renamed animals that had already been named by the other, even confusing specimens from different places and naming them as a single animal.

In 1877 Marsh wrote a paper describing some dinosaur fossils from the Wild West of the United States. One specimen he had was of a small sauropod (long-necked) dinosaur which he named Apatosaurus (ironically Apatosaurus means ” Deceptive Lizard”). Later, in the 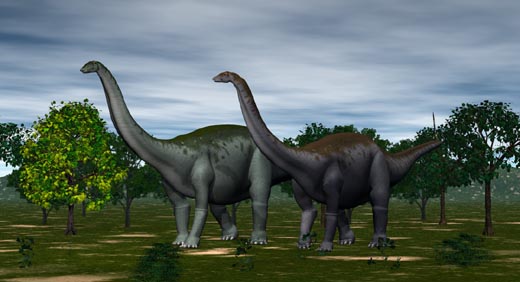 same paper, Marsh described a much bigger specimen of a sauropod as Brontosaurus (meaning “Thunder Lizard). The specimen that Apatosaurus was based on was scrappy and incomplete but the specimen of Brontosaurus was not only huge but also relatively complete. Huge, complete skeletons of dinosaurs are what people go to museums to see and so many copies of Brontosaurus were made and sent to museums and universities all around the world. Brontosaurus quickly became one of the best known dinosaurs in the world. Meanwhile Apatosaurus remained a poorly known, obscure dinosaur hidden away in the vaults of an American museum.

It was not until the 1970′s that more specimens of Brontosaurus were found and a stunning fact became obvious; Apatosaurus was a juvenile Brontosaurus or, more correctly, Brontosaurus was an adult Apatosaurus. They were the same thing and the one beast had two names. You can probably imagine the problems that would be caused if animals were allowed to have more than one proper scientific name. In taxonomy (the science of naming living things), only one name is allowed. So one of the names had to go, but which one? There are set rules which determine which name is the correct one when two names compete for the same animal. Put simply; first come, best dressed. The first name (Apatosaurus) stays, the second name (Brontosaurus) goes. That is why Brontosaurus no longer exists (in more ways than one!).

A challenge has been mounted against the dropping of Brontosaurus in favour of Apatosaurus based on the argument that Brontosaurus is more widely recognised and better known than Apatosaurus and to replace Brontosaurus with Apatosaurus would only create further confusion. This appeal is still being considered and any further development in this case will be reported in future issues of Dinosaur Times.

The story of confused Brontosaurus does not end there. When Marsh described Brontosaurus he had an almost complete skeleton. The only part missing was the head. Being a man of considerable pride, Marsh didn’t want to admit to having a headless dinosaur, particularly when he had a few spare dinosaur heads laying around. So Marsh quietly stuck a head on Brontosaurus that had been collected 300 miles away from the rest of the skeleton. How did he know he had the right kind of head? He didn’t know and he didn’t have the right head! This fact wasn’t recognised until more complete skeletons were found in the 1970′s. For almost 100 years, Brontosaurus had the wrong head! (The head Marsh gave Brontosaurus actually belonged to another long-necked dinosaur called Camarasaurus but the real head of  Brontosaurus looks more like the head of a third kind of long-necked dinosaur called Diplodocus). So that is one more confusion cleared up for this ancient beastie.

And I’ll bet that when this animals lumbered through the world it had not the faintest idea of the trouble it would cause 150 million years later!

Technical Adviser to Dinosaurs At Large

Dinosaurs At Large is an international company committed to delivering a one of a kind school experience for students. We are motivated by a vision to provide quality educational presentations to schools and see the need for world-class performances with museum quality exhibits where the students can be a part of an interactive learning experience – that is what brought us together as a company.

Our team is composed of highly qualified teachers that are fully trained in this field to ensure that you get the best educational experience for your school.

Dinosaurs At Large is a hands on, interactive educational experience for primary school children designed to develop an understanding of changing environments, extinction and the world of dinosaurs.

The presentation is developed in conjunction with palaeontologists and educators. Our presenters are fully qualified school teachers with specialised training in the subject of palaeontology to bring this subject alive and enrich your students.